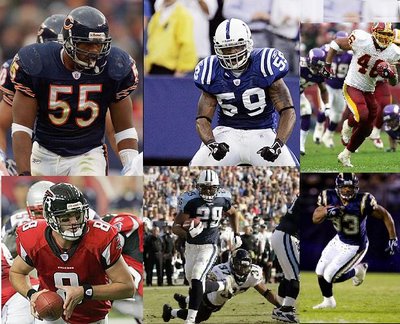 Since pretty much everybody in this city has written this year off, lets take a quick look at what free agents will be hitting the market this March. This is not a stellar free agent class at all, but there are some players who could make an immediate impact in some areas of weakness on the Eagles. There are some very good RB's and LB's in this crop, but will Andy Reid finally obey fans wishes of picking up either one. Probably not, but you can always dream. So with that lets begin the list.


Matt Schaub, ATL-QB, RFA:
Schaub is arguably the best back-up QB in the NFL. He could start for any team in the NFL today and make impact that second. With the injury to McNabb which could sideline him well into the '07 season fans will clamoring at the thought of picking up the University of Virgina product. Schaub is 25 and has been in the league for 3yrs. In the two games he has started Schaub threw for 486 yds, 3 TD's, and 2 picks.

Michael Turner, SD-RB, RFA:
Michael "The Burner" Turner is a small, fire hydrant type RB that is fast enough to out run a cornerback, and strong enough to run over a linebacker. Turner is listed at 5-10-237, and he will use all 237 to get a first down. Earlier this season when Tomlinson was in a rut, the Bolts turned to Turner and he gave them a huge boost during several games. His stats this season are, 58 carries for 357 yds and 2 TD's. He has a rushing average of 6.2 YPC, 5 carries over 20+ and converted for 17 first downs. He may be on the short side but Turner knows how to move the chains.

Ladell Betts, WAS-RB, UFA:
How nice would it be to take one of NFC east rivals key back-ups. Betts is a solid back-up and could start for some NFL teams. He is fast, has nice vision and can hit the holes hard. He's averaging 4.3 YPC for the pathetic Redskins, and is one of very few bright spots on that team. He could fit in well as a change of pace back to Westbrook though its unlikely he will settle for a back-up role again.

Chris Brown, TEN-RB, UFA:
Here's a great talent who just happened to get drafted by the wrong team at the wrong time. Brown has a the skills to be a starting RB in the NFL but has been injury prone. Brown has said in the recent months he is tired of sharing carries and wants to be a full-time starter. Brown is a tall back, but is kind of on the light side for his height. At 6-3, 220, Brown also has an unorthodox way of running the ball. He looks like Eric Dickerson minus the toughness and thunder to lay out defenders. I'm not saying he soft, he has shown plenty of promise. He would be a great change of pace RB for the Eagles.

Ernest Wilford, JAX-WR, RFA:
Wilford is a big strong WR, built like Randy Moss. At 6-4, he can leap with the best of them, and has good skills running with the ball after the catch. Wilford has been stuck in a mediocre Jaguars offense, and is looked at as the 3rd WR on the team behind Matt Jones and Reggie Williams. He would be a nice fit next to Stallworth and Brown in this offense and would be a major red zone threat.

Cato June, IND-LB, UFA:
If there is one player Andy Reid should break the bank to sign, its Cato June. The fans would thank the lord if Reid signs this stud LB. He is the type OLB that the fans of this town want so bad. It would erase all the nightmares of Dhani Jones doing the guitar dance after he makes a tackle on a guy who just ran for 30 yards. And finally get rid of those damn bow ties. June is great in coverage and almost never misses a tackle. He has 9 picks and 312 tackles in the last three seasons. Jackpot baby.

Lance Briggs, CHI-LB, UFA:
If June isn't available, Briggs is the next best. He possibly could be better than June. This guy has all around good talent. Some are skeptical that he is a product of his environment, which is, that his MLB is Brian Urlacher. Either way he would look good next Trotter. Briggs can stuff the run with the best of them. He would be a great replacement for Route 51 aka Matt McCoy. He lacks a little in coverage skills but would be great on the weak side.

So there is the first installment of this years X-Mas list. Reid has almost always went against fans wishes when it came to free agent signing. This year is not full of big names, but some big talent. Especially in two areas Eagles are lacking: RB and OLB.
Posted by ihatephilly at 2:28 PM 1 comment:

With 3:24 left on the clock in the forth quarter the Eagles had just taken a time out to try and get the defense together and stop Joseph Addai on first down. Addai got the ball on the same stretch play they had been running all night and ran for 9 yds. Just then the camera cut to Andy Reids face and it summed up how the whole night had gone. He looked like a beaten man physically and emotionally. His little reading glasses were askew in a 45 degree angle, his face beat red, eyes all watery, like a kid who had just lost his puppy. At that moment I actually felt sorry for him. He is the coach and GM who built the team that is on the field, but in the end, the players on the field have got to do their jobs. Reid is not the one on the field making some of the worst tackling attempts since LJ Smith tryed to hug Demarcus Ware in Week 4 against Dallas. It was pitiful to watch. On the offensive side of the ball you have to give some credit to the play calling and efficiency of the offense. Give Garcia credit, he played well and didn't make any stupid mistakes. When they had the ball the Eagles moved the ball pretty well. The first drive of the game was really great to watch. It was a 14 play drive for 59 yards that kept Manning and company off the field for 8:18. That was the game plan and it was working. After they failed to complete on third down, Akers was sent in to kick a chip shot. No good. Right then, you knew what type of night it was going to be. On defense it was pathetic how bad they were. It wasn't everybody on defense. It was mainly 3 guys. Matt McCoy aka Route 51, Dhani Jones, and Rod Hood. First lets start with the main culprit McCoy. He could be the worst OLB in the NFL. He is out position on every play, can never get off a block, and couldn't tackle his way out of a wet bag with a pair of scissors in his hand. Cliche I know, but that's how bad he is. McCoy was either A) on his back or B) missing a tackle on every play of the game. Next is Dhani Jones. The most well dressed overpaid LB in the league. Hes such a nice guy he just hates to make a tackle. Hes the king of tackling a guy after he runs for 10 yards, and he can't cover a TE to save his life. Last but not least Rod Hood. Now I know why you were on the inactive list last week when you perfectly healthy, YOU CAN NOT TACKLE. This guy is a solid cover corner and that is it. The Eagles defense was in the nickel almost the entire game, so they shifted Hood to cover Reggie Wayne, and put Sheldon Brown in the nickel position cause hes more physical then Hood. Unfortunately the Colts kept running the same stretch play at the corners all night which in resulted in Rod the Hood ornament being laid out or just flat out not wanting to make a tackle on the strong Addai. Before you annouce to everyone how you should be a starting corner in this league, take this spring off, go down to Ray Lewis' camp he holds for 12 and 13 years olds who DON'T KNOW HOW TO TACKLE, then think about calling yourself a starting corner. So in the end it wasn't, could the Eagles stop Manning, but could they contain Addai, and the answer was no. The Eagles had virtually 8 men on the field on defense and it was no match for the Colts running game.


Notes from the game

The Eagles were extremely well balanced. 149 yards on the ground and 151 threw the air.

How about the half ass job NBC did in giving Andre Waters a farewell. I know he isn't as brave as Pat Tillman or as well known as Reggie White, but come on. He got a little RIP from Madden and Michaels after they had ran out of material in the fourth quarter. At that point I think there was a total of 13 people watching including myself.

Again how bad is Matt McCoy. The worst was when Dallas Clark laid him out on a block to seal a Joseph Addai TD run.

Sean Considine is no better than Michael Lewis. Considine bit on a play action fake that left Reggie Wayne wide open for a TD. That's the same way Lewis was benched. His was only worse cause it was about a 40 yard TD pass and Considines was a 10 yard pass. Oh yeah, guess who was covering Wayne. Yup the Hood ornament himself.

AJ Feely threw a nice strike that hit Hank Baskett directly in the face. Threw his hands, into his face. Hes on his way to HOF. 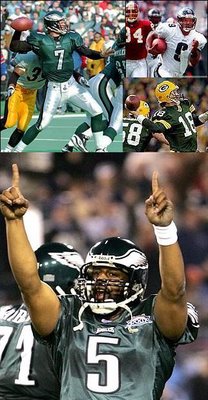 Here's a big Birthday wish to one the most loved, and most hated, players in the history of Philadelphia sports. Me personally, I think D-Mac is one the top 5 greatest Eagles of all-time and by the end of his career here in Philly, he will be #1 on that list. People in this town have a little amnesia in remembering what this town was like before Donovan arrived here in '99. As a B-day present to Donovan, let's go back and remember together. Here's the list of QB's under center before Donovan, and after "The Great" Randell Cunningham, and I use the word great very loosely. Rodney Peete, Ty Detmer, Bobby Hoying, and who could forget Doug Pederson. Man those were some great times, lets reminisce for a couple of minutes. The Eagles record from '94-'98 was 36-43-1. From '94-'98 the Eagles scored a total of 1,467 pts and the defense allowed 1,705 pts. Now lets look at the other side of things. From 2000, the first year Donovan was starter, to 2004, the Eagles were 59-21. They scored 1,869 pts, and allowed 1,241. This was done mostly with average WR's, except '04, and no true running attack. The Eagles of '94-'98 had a couple of big time RB's in Hershall Walker and Ricky "Running" Watters, and still couldn't get the job done. So before you go and bash McNabb, for being inaccurate, though he is ranked 36th all-time in completion percentage in front of every QB in Eagles history, or for not being fan friendly, who would be friendly to a group of people who booed at his draft and never cut him slack at any time during his career here, take a long look at the Eagles of the past and you will see the Eagles of our future without McNabb. Happy Birthday D-MAC.
Posted by ihatephilly at 6:49 AM No comments: