The Eagles aren't even out of the Playoffs yet and my mind is already wandering to what moves need to be made this off season. It doesn't help that the NFL draft is my single favorite sporting event of the year. I've always loved the draft since I was kid, and to this day when January/February rolls around I start getting hype.

So with that said, over the next couple of weeks I'm going to highlight 10 Players I would love the Eagles to target, even knowing that they probably won't draft one of them.

Brian Westbrook isn't getting any younger and his durability is becoming an issue week in and week out. It's to the point where he isn't even practicing during the week. Correll Buckhalter has been a good back up when healthy, but also has had multiple serious knee injuries during his career and is pushing 31 this year. Lorenzo Booker is well, mediocre at best. When picked up this year we were led to believe that Booker and Westbrook would see a lot of playing time together. Not the case. Barring a significant change in Booker's ability, he won't be on the roster come next season.

The Eagles need to draft their RB of the future and Moreno fits the mold of what Andy Reid loves in a RB. In the '05 draft the Eagles used a 3rd round pick on a player some called a "Westbrook clone(Sports Illustrated)" , Ryan Moats. They couldn't have been more wrong. But with Moreno, you are getting a guy is very similar to Westbrook and could be a better inside runner making him even more valuable. With his speed, vision, and natural play making ability, he is the "Westbrook clone" that the Eagles have been seeking since '05.

Moreno is currently projected by most "experts" and mock draft websites to go some where in the mid 1st round. The 2009 Draft Class is not deep at RB so a team with a serious need at RB might take a reach on Moreno around picks 14-22, a'la the Cowboys with Felix Jones in last years draft. It also doesn't help the Eagles that a couple of high profile underclassmen that were projected to be drafted in the 1st round have decided to return school. Moreno's stock seems to be rising with each passing day. With a stellar combine, Moreno could crack the top 10 but is more then likely to be a mid 1st rounder. So the Eagles have to either pray that he falls to 28th or trade up. Time will tell.
Posted by ihatephilly at 7:53 PM No comments: 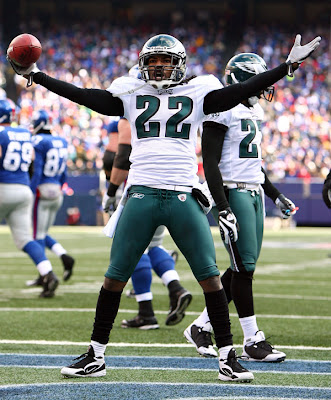 The Eagles have been able to do the unthinkable in a very short amount of time. After the horrible performance versus the Bengals and then the Ravens McNabb debacle, Nostradomus himself couldn't have predicted what the Eagles were able to do in the last two months.
The Eagles now have a serious shot at going to the Super Bowl, and possibly winning the Super Bowl. I know, slow down. One game at a time. With that I truly believe that the Eagles are the only team that can beat the Eagles this week. The recipe is pretty simple to beat Arizona, put pressure on Kurt Warner and you might as well put an Eagles jersey on him. It's that simple. The popular thing to say this week is that Larry Fitzgerald is going to be the key and he can't be stopped. Again its simple. You can stop Larry Fitzgerald, by putting pressure on Warner. If Warner isn't given the time, you could have my grandmother covering Fitzgerald, it won't matter. I'm going to go more in depth about what needs to be done exactly to get the win, but my main point will be, put pressure on Warner and he will hand you the win gift wrapped. With that, lets get into some more things that will make the Eagles day a little easier.

1) Control the clock: Slow the game down.

The one thing you absolutely can not do with the Cardinals, is let them get out to a fast start. What the Cardinals do a lot is stretch the field quickly and score quickly. When they do that, they sometimes force you to get away from your game plan. If they are up 14-0 or 17-0 in the second quarter, you might start to press a little and start getting away from what you do best. When this happens, mistakes are made, which leads to my next point.

This is the biggest key to the Cardinals recent success. In the Panther first 7 possessions, they scored a TD, they punted 3 times, and they had 3 turnovers. If any team has that bad of a start, you will never stand a chance to win that game. The Cardinals scored 17 points in the first half off of turnovers. That's the game right there. You either have to be Tom Brady or a miracle worker to come back from that. And Jake Delhomme is far from being either of those two. Now with the score being so lopsided, instead of running the ball which they do well, they had to rely on Jake Delhomme to get into a shootout with Kurt Warner. Ten times out of ten Delhomme loses that battle. So either credit the Cardinals defense for stopping the run and forcing turnovers or give credit to the Panthers for making it easy for the Cardinals. In the first half, the Panthers ran 25 plays in 7 possessions, 8 were runs. The first 2 possessions of the game each had 3 running plays. One of the possessions led to a TD. So for the next 5 possessions they ran the ball just 2 times. They deserved to lose.

3) You can't play a zone, and only rush four men against Kurt Warner.

I don't have to worry about this with Jim Johnson being defesive cordinator. He's going to have guys on Warner all day. I just got done watching the replay of the Panthers/Cardinals game on NFL Replay. And you could see why Warner was carving up the Panthers defense. They were rushing their defensive linemen and thats it pretty much the whole game. They had the occasonal blitz but for the most part Kurt Warner could have been bagging groceries and he still would have had time throw against that defense. It was pathetic. The Panthers sacked Warner 1 time last Saturday, thats it. Again, you deserved to lose. Moral of the story, if get pressure on Warner you will win the game, end of story.

Posted by ihatephilly at 1:28 PM No comments: